Panic is Not an Option

01 Apr Panic is Not an Option

It was day 2 of our bonefishing trip to Christmas Island, an atoll in the middle of the Pacific Ocean which is purported to be the 12th most remote location in the world…I have no idea where the first eleven are, but I digress. Shya and I were sharing one guide between us and after I had hooked a bonefish that was screaming the line off my reel, they both moved away from me down the flat while I fought my fish. It wasn’t long before the fish’s blistering run broke the tippet, which connects the line to the fly, and I retrieved my line, minus the fish and fly. As I looked up, Shya and the guide were far away, soon to walk out of view and then it happened – I began to shake.

After eating a fish with ciguatera poison several years before this trip, I became severely allergic to eating fish and nuts as they both reactivate the poison. When I eat fish, my breathing is impaired. With nuts, I generally get some breath impairment but also a racing heart and full body tremors. Before going out on the flat that day, I had taken electrolytes in pill form and even though there were no obvious allergens such as fish or nuts listed on the label, clearly there was something that didn’t agree with me. Fortunately, I had brought my little waterproof pill container with me in my belly pack and I got it out so that I could take a Benadryl® before the condition got worse. By the time I opened the bottle, I didn’t need to “shake” any out as my left hand was so unsteady, pills spilled out onto my trembling right hand. By now, I was incapable of choosing the correct pill as I was shuddering so deeply – so I used my tongue. On my first attempt I missed and dabbed up the orange Ibuprofen, which I spit into the sea; then the blue Aleve – also to be similarly discarded. Finally the remaining pink Benadryl which I swallowed dry as I couldn’t even begin to open my water. By now, my legs were shaking hard enough that I was having a difficult time standing. I spilled out more pills and consumed a second Benadryl, figuring that better a sleepy day than no day at all!

Looking up, I was alone. Miles of flats and no one in sight as Shya and our guide had disappeared behind a distant stand of scrubby trees. What to do? Panic was not an option. I knew from past experience that it would take a few minutes for the Benadryl’s antihistamine to take effect and that focusing on my own personal earthquake would only heighten the symptoms. So I challenged myself to tie on a new fly, shaking and all. Although it took quite a while to execute the move, I chose a sweet little fly from my fly box, tied it on, and distracted myself from my physical discomfort by as stealthily as possible walking down the flat and hunting for Mr. Bone. By the time my guide called a boatman to bring our boat around and ultimately came back for me, the shaking had subsided. 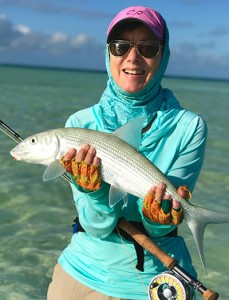 ater I realized that it never occurred to me to panic. Shya was not there. Help was not there. I was on my own. Yet I was capable – extremely capable. We all have reserves of capability but our thoughts about what we can do and the stories we carry around about what we have done (or not done) in the past, can cloud the moment so we often look to others, thinking that we cannot take care of things ourselves. If I had Shya or someone else with me that day, I wouldn’t have hesitated to “share the load” but I was reminded once again that being supported by someone doesn’t mean collapsing in on myself and abdicating responsibility.

Shya and I are partners, I have many friends and there are even strangers who would certainly step up in a time of need. But on that day, surrounded on all sides by miles of water and fish and scrubby trees without another human being in sight, I demonstrated, without thinking, that panic is not an option and I am indeed fully capable on my own.